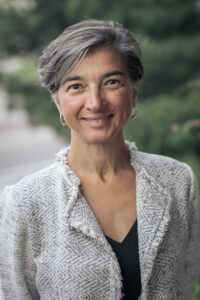 Özkan-Haller previously served as Associate Vice President for Research Administration and Development in the Research Office. She also previously led the Office of Sponsored Research and Awards Administration and guided building the university’s research development capacity and providing strategy to meet the needs of OSU’s growing research enterprise. She previously also served as Associate Dean for Research and Faculty Advancement in the College of Earth, Ocean, and Atmospheric Sciences.

As a faculty member, she focuses on the use of numerical, field, laboratory, and analytical approaches to arrive at a predictive understanding of waves, circulation, and beach change in the nearshore ocean, including the continental shelf, the surf zone, inlets, and estuaries. The results of this work are being applied to navigational planning, for the development and design of wave energy conversion devices, and for forecasting of beach-goer hazards.

She has also extensively engaged in work to increase diversity and inclusivity in academia and was a co-Principal Investigator for OSU’s ADVANCE grant from the National Science Foundation aimed at increasing the participation of women and other under-represented groups within faculty in STEM disciplines. She has given various invited talks on this subject, including a plenary talk at the 2018 Goldschmidt Conference of the  Geochemical Society and the European Association of Geochemistry.

Nationally,  Özkan-Haller is currently serving as a member on two Federal Advisory Committees: the Hydrographic Survey Review Panel of the National Oceanic and Atmospheric Administration (NOAA), and the Coastal Engineering Research Board of the Army Corps of Engineers. She has previously served for two terms as a member of the Ocean Studies Board of the National Academies of Science, Engineering, and Medicine (NASEM) and has participated in various NASEM studies, including as the chair of a consensus study on the future of the U.S. Gulf Coast.

Özkan-Haller is passionate about communicating science to the public and has appeared in numerous documentaries produced by the History Channel, the National Geographic Channel, and Oregon Public Broadcasting, and was quoted in various news segments and newspaper articles, most recently about sneaker wave fatalities along the Pacific Northwest Coastline of the US. She has also authored various opinion pieces.